The meek shall inherit … 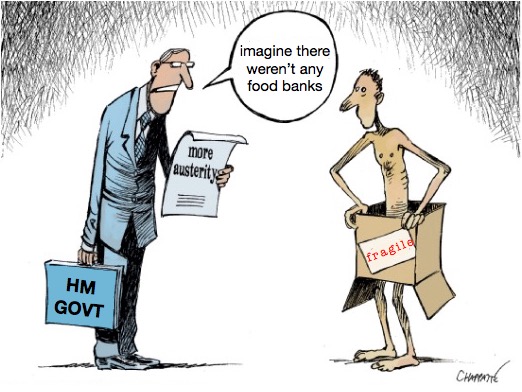 The meek shall inherit the dearth (lack, want, need, absence, poverty, shortage). For now, at least, the Biblical quote looks like a typo.
With dishonourable exceptions,  the “Crash” meant huge pain for the world in general and the UK in particular. Now, nearly 10 years on, the UK still hasn’t recovered the cost of bailing out the financial sector. At the same time, those who created the problem got away with it. As a matter of fact, we citizens (AKA the meek) are paying off the Financial Sector’s losses … discuss, deny or fudge as you choose.

[wpvideo 6u0HOzkA]
“Austerity” price isn’t just money, of course, it includes benefit cuts, NHS under-funding, UK asset-stripping, the blunting of National Defence, unprincipled public projects (PFI, Nuclear Power) and so on. It’s worth remembering people died and are dying still.
The government decided the meek shall inherit the UK’s debt. This evil inflicted on the weak, the apathetic, the lazy, the innocent, the children, infant mortality… Whatever on your point of view, Austerity bites people hard and will for years to come.

Chat with a fellow citizen and, regardless of politics, our common ground is often the befuddlement of Westminster. For example, how many people believe our leaders are competent (the qualities needed for effective action)?
In like manner, do they notice deceitful (crooked, dishonest, double-dealing, false) behaviour?
In spite of a truthful ring, ill-conceived ideas, half-truth and downright lies are rubber stamped by ideology (creed, doctrine, dogma) and nurtured by political spin.

Do the weak, defenceless, matter?

The squeeze on public finances since 2010 is linked to nearly 120,000 excess deaths in England, with the over 60s and care home residents bearing the brunt, reveals the first study of its kind. November 15 2017, BMJ Open (British Medical Journal).

Anyone who has experienced bereavement will know the acute agony of loss. Okay, government, tell the people who lost loved ones, that the end justifies the means and there was no alternative.
Ideology, incompetence and deceit meant the meek inherited the debts from the Crash. In other words, the 2007 banking crisis and the 2008 financial crisis which led to the Great Recession (Crash) cost us dear and killed tens of thousands of people. Never mind the 40,000 people a year allegedly dying from air pollution in our cities.

Why inflict pain on the innocent?

Back to “the meek shall inherit the dearth.” Our leaders implemented ”Austerity”. In fact, they promised the misery would cure our crash-related problems. As it turns out, they got it wrong, missed their deadlines and continue dissembling about it.
Sad to say, by December 2017, 14 million people were in poverty in the UK and 4 million of these were children. Furthermore, the death rates of older pensioners rose in some areas. Now many public employees need food banks.

Is it true to say Austerity punishes citizens for a financial crash they didn’t create? Whatever the outcome, at least we know where the culpability lies.
Soon, I’ll explore this further. The numbers are scary.
© Mac Logan

One Response to “The Meek Shall Inherit the Dearth (video)”