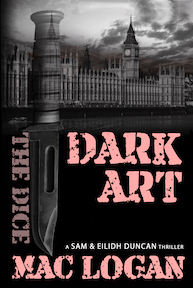 IF YOU LIKE the Bourne movies and writers like Lee Child, Robert Crais & James Patterson you’ve come to the right place. If a well-researched, fast-paced style floats your boat this is for you.

The excitement and action are cranked up another notch … Some players they trusted are proven unworthy as the dark corruption bleeds into government agencies. Thrilling to the last page. A very satisfying read!” Virginia Gray, best selling author, USA

The kilted against the killers

SCOTTISH CRIME and Mystery Writing with an international dimension.

… the scary thing is that it could be happening right now. Dark Art is fast-paced, exciting and difficult to put down book. The story takes all kinds of twists and turns and you never know where it is leading, who was responsible, or how it would turn out until the end. I read it in one afternoon and evening because I could not put it down, a rare thing for me and a wonderful indulgence. Dark Art is not only a good tale but also suggests an interesting insight into the dark side of state institutions and their officers.“ Chris G, UK

Fear makes killers of them all

AN UNMEMORABLE MAN walks into an upmarket restaurant in the City of London. Within seconds, a senior banker lies dead. Shortly afterwards a senior Civil Servant is also shot. Someone is tidying up.

DARK ART picks up where Angels’ Cut leaves off. In Europe and the USA, Sam Duncan squares up to a secret cabal motivated by greed and power. These players incite corruption, treachery and murder. 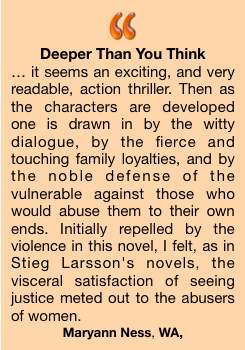 It takes courage to stay in the fight

SAM DUNCAN and the mysterious Tonka plunge into a lethal escalation of the battle against a monstrous global confederacy of business, criminals, bankers, officials and politicians want to stop him. Money talks as betrayal and murder stalk Sam and disrupt his investigation.

Powerful people don’t want the truth to come out

IN THE GLOBAL ECONOMY, pervasive as the Internet, greed and evil hold the high ground.

IN THIS GRITTY and topical conspiracy thriller, death shadows a courageous team as their investigations lead into Europe, the USA and beyond. The more they uncover, the more vicious the response from their well-connected enemy. Of course, there are good guys, but who can you trust?

I really enjoyed this second book in the Trilogy, it was as thrilling as the first, fast and furious pace with great characters and as the suspense and mysteries unfold keep you enthralled and in suspense until the very end. Please Mac get on with finishing the last part in this fantastic trilogy. I cant wait…..“ Diane P, UK

To what lengths will corrupt people go?

SAM, TONKA and a mysterious woman are hunters … and hunted. In the blink-of-an-eye, their enemy, a deadly hydra-like network, attacks from all sides. Its lethal reach and power is as frightening as it is murderous.

AGGRESSIVE PURSUIT once more places the team in stark jeopardy and survival comes down to a matter of minutes. What price the power of love in the darkest of times?

JUST WHAT can you do to overcome an unprincipled foe? In a wild final confrontation, Sam is going to find out. Win or lose, there’ll be a price to pay.