This is for people who’d like to have a pre-editor (sorry Ms Whiplash) taste of the third book in The Angels’ Share series, the Devil’s Due. 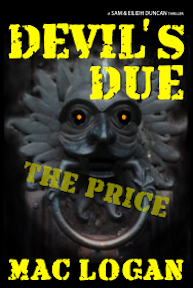 SAM CROSSED THE lounge and picked up. ‘Duncan.’ He listened and the slight smile on his face straightened. He stared at the wall. ‘On my way.’

‘They crossed the perimeter.’

‘She is sixteen, darling, she needs to get out and meet boys. They need a little darkness for a cuddle.’

‘Jeanie’s in a unique situation,’ Sam said. He left the room, returning moments later with his Colt Light Weight Commander and a shoulder rig. He worked the action, holstered and secured the gun. ‘I’ll find her.’

‘Weren’t you ever naughty?’

‘Often.’ He stalked away.

He switched the porch-light off and eased into the twilight, pushing his left arm into his jacket as he strode towards a shed under some trees, by the driveway.

A man stepped out to meet him. Karen contemplated their silhouettes, her mouth a quivering line. A tear trickled down her cheek as a dark car pulled up, Sam got in and the vehicle drew away.

A SILENT, FAST-MOVING silhouette vanished into a narrow gap between two garages and jogged down the twisting path beyond. He left the track where it veered right and made straight for the woods.

Vegetation tugged as Sam stole on to a small beach with five metres of burbling, rock-strewn water between him and a near-vertical bank. He dashed across, no regard for wet feet.

At the far side, he bounded forward and, grabbing the trunk of a sapling, swung his right foot onto a protruding ledge. His shoulder touched the steep face as he leaned back against a solid outcrop. He gripped a thick, dangling root and hauled himself upright. In balance, he relaxed and took a deep breath.

After the pause, he searched above, reached high and grasped a strong handhold with his left hand. His leg propelled him forward as he took his weight on his left hand, swinging around to another foothold. Continuing the move, heaved himself upwards once more. At last, head level with a clearing, he grabbed the base of a bush, braced his feet on the edge and pulled himself onto the flat ground on top of the bank.

He crept into cover, leaned against a tree and peered back, easing his automatic in its holster. No sign of followers, he brushed his trousers off with his hand.

He moved down the path which followed the twists and turns of a stream, enjoying the buzz of activated muscle as he calmed his breathing and crept down the trail.

In the gathering gloom, he made for a stand of tall trees. A quiet murmur of young voices carried. He half-smiled, eyes glinting in the moonlight.

THE ROMANTIC PAIR jumped as a man materialized beside them. ‘You’re running late, guys.’

‘Fair enough, Robbie, you head off and I’ll walk Jeanie back.’ The young people deflated in an instant. They hesitated. ‘Off you go, lad. There’s always tomorrow.’ Robbie turned, and, head down, walked off towards the Kirk burn. The farm was only ten minutes away.

Sam recognized the glint in his daughter’s eye. ‘We’re not usually late, Dad.’ Her angry whisper hissed in the gloom.

‘I know, Jeannie. We’re not making anything of it.’

‘We’re only a few hundred yards from the mill.’

‘Could be the difference between life and death, Jeannie.’

‘The perimeter is patrolled by our protectors. Step outside it and you put us all in danger, and that includes Robbie. I explained this. I’m here to protect you.’

‘I wish … then I wouldn’t have buried a pal the other day.’

What started as an angry in-breath ended as a sob. ‘Sorry, Dad, I loved him too.’

‘Let’s get back.’ They started down the hill towards the main path by the river. Within five paces, a button taped to Sam’s upper arm delivered three silent buzzes. He grabbed Jeanie’s arm. ‘Shhh.’ He whispered in her ear. ‘Time to vanish. We’ll take the hedge line along the field. We’ll talk by the falls. Until then, quiet.’

‘Dad. I’m stuck.’ Jeannie kept her voice quiet, brittle with tension and pain. Sam explored where the barbed wire had pierced her leg at the back of her knee, his touch as gentle as darkness allowed.

‘Right, here we go.’ Half-lifting her, hip to hip, he reached around and eased her off the barb. She hissed as the wire came out.

Ten minutes later they sat on rocks by the waterfall halfway up the hill.

‘How do you know we’re in danger?’

‘There’s a tiny receiver taped to my arm. It vibrates. Three buzzes mean utmost-get-the-fuck-out-of-there!’ Tense hilarity exploded between them in wheezy, whispery snickers. He’d never sworn with her before.

‘Plan to get home alive.’

‘WE’LL CLIMB the fence by the straining post. Hunker-down until I’m beside you. Then we’ll dash up the track to the main road, and left onto the bridge.’

Her breath tickled as she whispered back. ‘Thank God. I’m tired of wading down all the streams, Dad. We’ve crawled along every hedge in the county.’ A heartfelt sigh welled up, ‘It’s tiring. Why couldn’t we make a run for it sooner?’

‘Invisibility. We see dimly by the light of the moon. People with night-vision see much more.’ He rubbed her back. ‘Now you get your wish.’

‘Some warm up.’ The humour in her tone made him smile. Morale good.

‘Okay, over you go.’ He pushed her bottom and helped her climb the post’s angled support. Her hand scraped on a barb. She winced, yet remained silent. Sam squatted beside her. She sucked a finger. ‘How bad?’

‘Sore. I’ll live.’ He gazed all around them with care. ‘What are you looking for, Dad?’

‘Movement. Haven’t spotted anyone yet, but it’s hard to tell.’

‘Okay. When we get to the bridge, we’re heading for the right-hand side.

We’ll use the midway marker where it’s safe to drop into the big pool, like they do at the Summer Fair.’

‘Crawl all over the countryside and now jump in a bloody a river.’

‘Romance isn’t all it’s cracked up to be, my girl. Go!’ He slapped her backside. They jogged round the corner and up the track. He pulled back on her jacket to slow and direct her. They hugged the bridge wall.

A car passed from the north side, over the bridge and turned south. The tail lights dwindled. ‘Okay?’

He pushed her. They raced across the bridge. The water roared. He found the marker and pulled her towards him, remembering his first jump from a plane. The less thinking time, the better. ‘Up you go.’

The parapet was about two feet wide. He helped her slide over, holding her wrists tight. She let her right leg go down whilst her left knee and calf rested on the bridge. Her breath hissed in fear. ‘I’ve got you. Let your other leg dangle.’

She dragged her knee off the bridge with a little squeal and hung from her father’s hands. ‘I’m okay.’

‘That’s my girl.’ He leaned forward, belt buckle grinding on stone, forearms locked on the rugged surface. He held her clear of the wall. ‘I’m going to let you drop. Remember, knees bent when you hit the water.’ Their eyes locked. ‘Swim clear, I’ll be right behind you.’ Trust and love shone from her eyes. His heart ached as he let her go, watching the pale face fall away and vanish in the gloom and roar of water.

Sam put his knee on the marker, gripped the edge of the stonework and pulled himself forward. His toe scraped free of the loose gravel as he swung his other leg up, squatting and preparing for the drop. As he rose to complete the move, a rough hand grabbed his collar and dragged him back towards the road. His mind screamed for Jeannie, as he tumbled onto hard tarmac.