Parliament, over many years and in many diverse ways, has allowed its powers to ebb away, to the extent that it has become a weak institution, with very little power and little relevance to the concerns of ordinary people. Richard North

Bubble, What Bubble? Trouble, What Trouble? 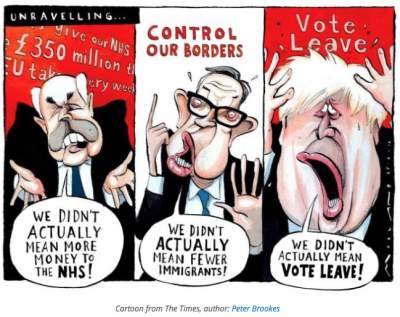 Everywhere you look there’s potential trouble in the Westminster Bubble. You know, that place where UK politicians, who aspire to serve us, expend phenomenal energy and effort on our behalf … or, perhaps, in small-minded battles of spin, deceit and vengeance

We elect our leaders. That’s what democracy is all about, isn’t it?

When will the voters, who protested by voting leave, realise they were conned?

What will they do if their jobs, pensions, health and education opportunities go? Over the weekend the Brexit Campaigners attempted to quietly drop certain of their claims and renamed themselves Change Britain. All this is reminiscent of flatulence-bubbles in a bath, they look as pretty as the scented soapy bubbles then burst with a sulphurous stink.

There are loads of bubbles burbling away out there. What is the truth?

Corbyn’s original bid came about because twenty MPs, perhaps with a tokenistic mind-set, decided he (his ilk) should be given a voice. After all, he’d never catch on with his old-fashioned ideas. But he caught on … Then he did. Perhaps members have joined the party to support a left-leaning leader. However, however inept at times, there still seems to be a significant disagreement between the hired help (MPs) and the grassroots (left-leaning people).

Remember Scottish devolution? How the settlement included proportional representation. Interesting word, proportional (comparable, pro rata, in proportion, commensurate, equivalent, etc). The reasoning was simple: if political representation is proportional there could never be an overall majority and true power would, therefore, always reside in Westminster. Then the SNP won a majority …

It’s hard not to wonder, bearing in mind the anti-democratic intent for Scotland if the idea of true democracy has yet to penetrate the big Westminster political bubble at all. “Brexit is Brexit” after all. Even if there is no political mandate for the government.

Imagine, shocked politicians and parties discover there are people they must pay attention to outside their Bubble. Imagine they also have differing views about what matters, politically. What are they to do? Ignore people?

Theresa May, says Brexit means Brexit, but she can’t say what it means for us. What does it mean? It is something the politicians and officials are studying. Perhaps a ‘foreign’ paper has an idea.
Is the honeymoon over? ‘POP‘
Will BoJo and LiFo stop in-fighting? ‘POP‘
Will Philip Hammond cope? ‘POP‘
Will the EU do what BoJo, LiFo and MiGo promised? ‘POP‘

The EU split is upon us. Will the status quo remain? Or, will more bubbles burst as our fellow citizens suss out the spin and half-truths, get out of their Bubbles and demand honesty and effectiveness from our leaders.

Will things ever be the same again? I hope not.