The unaccountable in Pursuit of the Ineligible 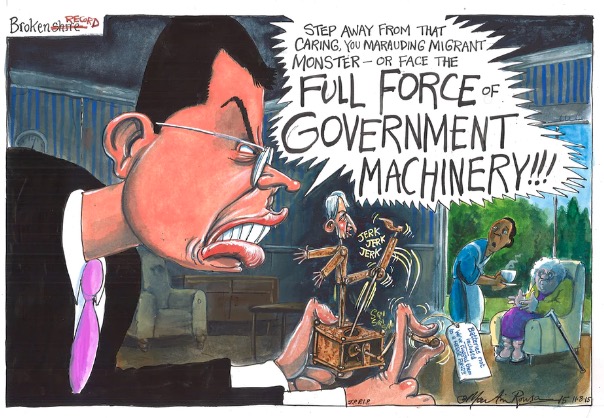 I watched and listened to the crude racism of English football supporters. In other reports, people in the UK blamed immigration for their ills.  Whatever the true reality, I can’t help feeling:

Sometimes, one of life‘s greatest challenges is to stand up and speak out. I believe in healing and conciliation. That hasn’t changed. In this piece, there is anger, yet the challenge always remains to put such energy to constructive use.

The vans move quietly into place. The livery is shiny white paint above Day-Glo yellow stripes and a light/dark blue checkerboard below. Inside team member adrenalin flows in the acrid, humid air. Raiders sweat in knife-proof vests. Communicator earpieces and underwear tickle with perspiration. Utility belts are stuffed full of interesting bits and pieces like a quality Calzone.

The diners look up, bemused, as black-clothed officials enter. The operation is as commando like as flabby-bodied officials can achieve. Of course, having police support makes a huge difference.

In moments a row of scared workers stands, fearful, lined-up along a wall, including British, EU and non-EU citizens. Is this reminiscent of the rise of the Third Reich in the 1930’s? In full view of the diners, the singled-out are searched, fingerprinted and questioned. As these things go it’s efficient, achieves its operational target and the law is seen to be enforced.

A concurrent press release provides smug are-we-good-or-what publicity for the press to share, not to mention the usual comments from Internet readers. You know, from supportive to colourful, to racist.

A fourth man, a 30-year-old Tunisian, was escorted from the premises by immigration officers after checks revealed he did not have permission to work in the UK.

This information was untrue. He had permission. Something went wrong … the intelligence ‘checks’ by the sound of things?

There’s vast scope for intelligence. Immigration Enforcement is part of the UK Home Office. Their powers include forced entry, interrogation and arrest.  And that’s not all …

… since 2013 immigration officials have been granted the power to “property interference, including interference with equipment”, which can include planting a listening device in a home, car or detention centre, as well as hacking into phones or computers. The Observer 10 April 2016

This exercise seems a proper exercise of power: two Syrians, an Egyptian rousted then released and a Tunisian removed. However, no one is in custody.

The Tunisian is working legally. Oops! His (British) wife get’s a call and a checklist interrogation that is: of a British Citizen (born and bred) by an Immigration Officer:

All questions are answered.

Next day the police tell British Citizen it’s nothing to do with them. They are helpful and respectful. Their role is to provide support and protection for everyone as Immigration Officers do their duty, otherwise, they’re not involved — they do tough work with dignity.

For Immigration and the Police, it’s routine—to the point where the same quotes from AD Philippa Russell have appeared in press releases for the past few months.

For the diners, this may have put some of them off their food, spiced-up the conversation of others and, maybe, added a sense of shame for the public humiliation of other human beings. Imagine, the nice waiter looking after you is humbled and disappeared in front of your very eyes.

It must be scary … being made to stand against a wall in front of onlookers; fingerprinted and interrogated? Probably so, for legals and illegals alike. Okay, it’s not the St Valentines Day massacre and, on the upside, we don’t drag ‘em off and shoot ‘em. We simply bully and harass them.

The Tunisian man is working legally and in the middle of legal proceedings to determine his right to remain in the UK. However, delays are frequent and this isn’t the first cock-up, for that matter.

As mentioned, the local Member of Parliament became involved. She was given information by the Home Office and wrote to this man and advised him to leave the country, immediately.

It’s hard to imagine Immigration Enforcement would let, even an innocent man, return to the UK (one way of burying mistakes without killing them), even though the Home Office may have provided a British Citizen’s MP with incomplete information.

I wonder what many months of bungling and bureaucratic bullying have done for this innocent man’s mental health. He and his wife have been serially psychologically harmed. He has never claimed benefits and always self-supported. The couple respects British law. They aim to start a business and will create jobs in the future. He is personable, capable and speaks several languages. He is loved by his British family.

I wonder if the Assistant Director of the Immigration Enforcement team loses sleep over the mistakes of her people and collateral damage of the occasional screw-up. You can’t make omelettes without breaking eggs as they say. Assistant Director Russell says:

Using illegal labour is not victimless. It defrauds the Treasury …

Persecuting legal labour when intelligence fails isn’t victimless either, it harms people, people who are paying tax to the Treasury.

An innocent man, of the wrong ethnicity, was humiliated and his wife subject to hard-edged bureaucracy because the correct intel wasn’t there, an Immigration Enforcement equivalent of friendly fire. In this case:

Suffice to say this isn’t the only cock-up in this sad situation. Assistant Director Russell labels her operation a success. Our present Home Secretary bangs on about such successes in Parliament, raking the coals of racism and hatred — a mendacious exemplar of a dissembling breed.

A Duty of Care

Of course, our Immigration people are there to protect us, our borders and economy. It’s essential. It is a shame Immigration Enforcement’s data can be out of date and their PR is a bit amateur but, hey, so are their political bosses … and, after all, they are only following orders.

Does Immigration Enforcement uphold the best of our British values while they do their work? We don’t want to radicalize people … do we?

I’d like to believe that a few unaccountable, senior as possible, apparatchiks will get a *private* shellacking, but can’t imagine from whom. Come to think of it lining the naughty up against a wall and inspecting their credentials may offer a certain attraction to some politicos … although it might put the diners off.

One thing is for certain, as the AD says: these successful operations reflect our work.

Am I holding my breath for the apology? What do you think …

PS: if any of this resonates with you … pass it on. There’ll be more in due course.

6 Responses to “Immigration – The Unaccountable in Pursuit of the Ineligible”